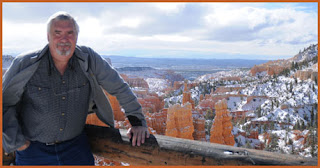 Standing on the rim at Bryce in the snow - 24 degrees out!
This morning we got an early start, well, earlier start.  We checked out from Ruby's Inn and began a tour of Bryce Canyon.  It had snowed during the night and the temps dropped to the low 20's. Hiking the trails was an impossibility as they were covered in ice and snow.  The scenery with the snow was spectacular.
Ruby's Inn Lobby
Paria View, Bryce Canyon
After leaving Bryce Canyon proper we drove in blowing snow for a few hours. The driving conditions were deplorable.  Once we traveled about 50 miles on Interstate 15 the snow began to diminish and the sun tried to come out but it wasn't until we were north of Salt Lake city that the weather really cleared. We had planned on stopping in Salt Lake city to visit an old friend and his family but decided to press on as the weather is beginning to box us in. Sorry Shane, next time. . .
Typical gas stop along Utah I-15 with snow squalls
North of Salt Lake City we made a quick side stop at the Willard Bay Marina... had to shoot a pix of the lake.
Willard Bay Marina South
We drove on to Idaho Falls and arrived at about 7:00 pm so it was a long day of driving indeed... and we still didn't finish another book CD.  Idaho Falls took us by surprise as it is quite a quaint and picturesque town.  We found a great  motel, The Driftwood Inn, right at the falls. Before supper we walked along the Snake River River Walk and shot several views of the falls and of the river.
Idaho Falls
Snake River Bridges
The weather looks dicy and we have discovered that the East Entrance to Yellowstone is closed until May 7th -  this may add several hours to our drive to Cody.... we will see how it all works out.  Up early tomorrow and off the the Snow Lodge in Yellowstone, across the street from Old Faithful and to see how all the road conditions are. . . . We may be out of contact as the internet connections and cellphone service was non-existant at the Grand Canyon and at this point it is an unknown at Yellowstone, so until next time, so long for now.

Dad, these are great! And SNOW!! Whoa.