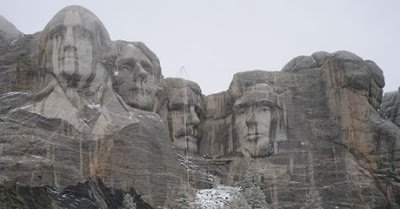 Mount Rushmore - Looks like they are crying
As you can see by the image above, our good weather is beginning to run  out.  While here a Mount Rushmore today we had fog and snow and rain.  Later it cleared and even later it snowed again.  Temps ranged from 21 in Spearfish Canyon to 45 in Keystone... go figure. So our journey began with family in San Francisco, Jason, Megan, Dan, Ben and Gracie and tomorrow we journey to Omaha and join my two brothers Dan and Dave, so we end with family. This is a great trip.  Thanks for all the feedback from everyone who has kept in touch.  We often curse technology but it has really enhanced our experience on this trip, so to the folks at work, friends at home and away and family across the country, thanks for being a great part of this trip. OK, enough sappy stuff, here is what you really want - the photos.  First off - it is a long drive from Cody to Deadwood, but we liked the Cody Historical Museum so much we went back for a while before heading out on the road.  This first shot I took in the firearms part of the museum - wow what a collection. They didn't allow tripods and I didn't have my 8mm lens so I shot this one hand held, six shots with a 10.5 mm lens. It didn't stitch all that well and since I had a lot to stitch I didn't fuss with it too much but you can see some of the issues that arise when doing this stiff.

Once on the road we settled into landscape watching and it didn't disappoint.  This is a varied landscape.
Here is a sampling from along the route (s)

As I had mentioned before, Carol isn't too keen on heights and the Bighorn Mountains kept her alert...
Climbing up the Bighorn Mountains we followed Shell Creek (My brother Dave suggested that we stop at the falls -- they were closed to repair the facilities) where we found this overlook and met a happy camper named Terry and his dog Wiley who has been there in his trailer for a while, (couple of months) hiking the mountains looking for antlers.  He said he gets $8 a pound. This was a beautiful spot.

Bighorn Overlook 1 - Called Fallen City because of a landslide

Bighorn Overlook 2 - The missing trees on the far hillside is from a tornado in 1959 - that's what the sign said!!!

Once out of the mountains and we were eager to get to Sheridan as we had seen signs for Dan's Western Wear and I needed a western shirt.  Sheridan didn't disappoint and we had lunch at the local brew pub, food was great - the local beer was not so hot. Just east of Sheridan we crossed a huge coal strip mining operation and saw many oil wells pumping.  In the shot below far in the distance is a train full of coal and it is behind an oil well...lots of energy out here.

As the day progressed, and because of our late start we hemmed and hawed over going to Devils Tower but decided to go even though it would be late in the day.  We arrived just before 7 pm as it was getting dim if not dark.  We saw many deer, pronghorns, turkeys and prairie dogs along the way.  The decision was the right one as we loved Devils Tower and wish we could have arrived earlier in the day.  The light was poor and we didn't have too much time for hiking.  We hiked up to the base of the skree but it was getting darker so we opted to head out toward Deadwood, an hour away.

Devils Tower from the approach

Devils Tower from the visitors center.

We arrived in Deadwood just after dark and just before it began to snow. Perfect timing.  We are at Cadillac Jack's casino which came recommended - thanks Missy. This is a good spot although there seems to be an age and weight requirement for the women here this week -- lot of old fat ladies.... maybe it is a club or secret order or something.  Today we struck out in the snow to climb to the Mt. Moriah Cemetery and visit the graves of Wild Bill and Calamity Jane and other notables of the old west.

The grave of Wild Bill and Calamity Jane

From there we went back down into town and did a bit of shopping, found some jewelry and even visited the local museum (doesn't compare with the Cody Museum) and then took off for Mount Rushmore and of course the snow began.  We took the scenic route down along 385 and it was spectacular.  We had Mountain Goats at the entrance to Mount Rushmore.  Here is a shot from the viewing area - they really are big, but don't look it here.  I talked to my friend Bob today and he told me that the market took a nose dive... it looks like these guys are crying, maybe it is about the market.

The small village of Keystone at the base of Mount Rushmore caters to us tourists.  We had a turkey melt at the family restaurant here - pretty good. If you ever need a Mt Rushmore/South Dakota/Black Hills souvenir - this is the place.

On the return from Rushmore we took a swing through Sturgis.  My brothers ride over here every summer for the great gathering -- I felt like such a poser walking around here driving a Ford....... Cool town and with the countryside I understand why people return year after year.  There is a lot of really really nice sculpture here.  The shot below doesn't do justice to this piece but I tried.  I love this.  Zoom in and check out that it is made from saw blade and wrenches and leaf springs... so nice.

After returning to Deadwood I dropped Carol off at Cadillac Jacks as she needed to use the exercise room, it has been a sedentary vacation.  Spurts of hiking and long time sitting in the car.  Should have been the other way around.  Anyway, I took a drive up through Spearfish Canyon which is as beautiful as just about anything we have seen.  I hiked down to photograph Spearfish Falls... very cool spot.

So that is about all I have for now.  I shot a lot more images than I am posting here tonight - time is the limiting factor today as we will be up at 5:00 to head out early tomorrow. Am eager to visit with brothers and catch up on everything. No gallery today.... maybe over the weekend.....

I particularly liked the Museum of Flight. I clearly remember such mom and pop museums on road trips with Kathy. Some people disparagingly refer to these as "tourist traps"!

The variety of outcrops you have seen on your vacation is beyond description. It matches the breathe of weather you have experienced. Ending with family as you started is apropros and a safe flight home.